In 1775, the shot heard “round the world” was fired in Concord, Massachusetts and heralded the beginning of the Revolutionary War. For the next several years, battles raged in the northern colonies. By 1778, the British decided to refocus on the southern colonies. They believed that large numbers of Loyalists would flock to the King’s banners. They also believed that by regaining the south, the British army could march north and finally defeat the American rebels. 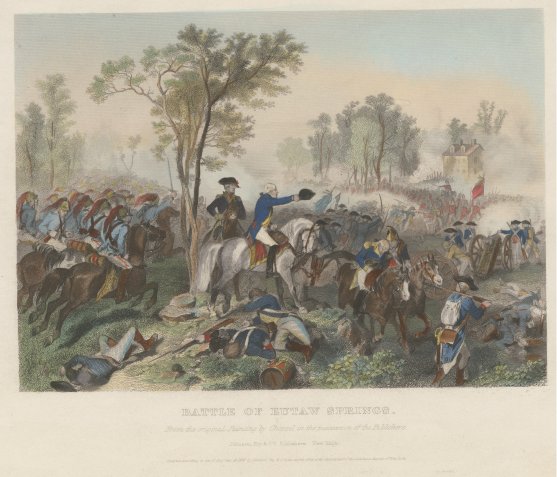 Over the course of the next year, South Carolinians took to the fields, woods and swamps to keep the British tied down and give the rebel forces time to regroup. Civilians…militia…Continental troops all came together to fight for independence and turn the tide of the war. 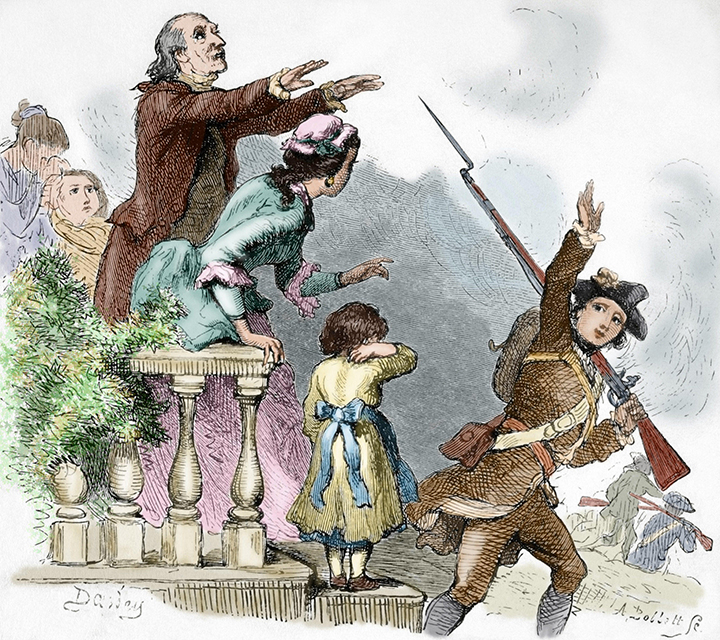 In South Carolina, you were either a Patriot or a Loyalist. Although many tried to remain neutral, either in the beginning or after the British regained control of the state, those fighting against each other rarely acknowledged that neutrality. In the civil war that roiled South Carolina during the American Revolution – you were a Friend or a Foe.

Minuteman leaves for the war while he is blessed by a priest. 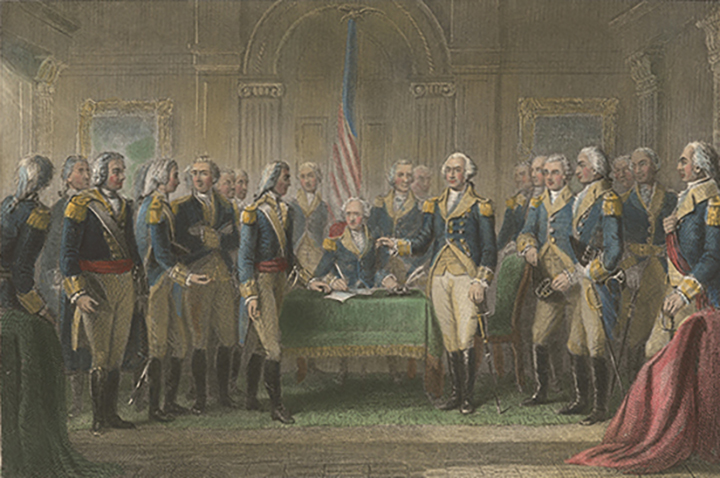 An army established by the Continental Congress and composed of soldiers from all 13 colonies or states. This army was trained by professional soldiers, paid (when paid!) by Congress and fought where needed. The various units were referred to by their state like the “Maryland Line” or the “Virginia Regiment.” Their officers were appointed by and answerable to General Washington and Congress.

Interview of Howe’s messenger with Washington. 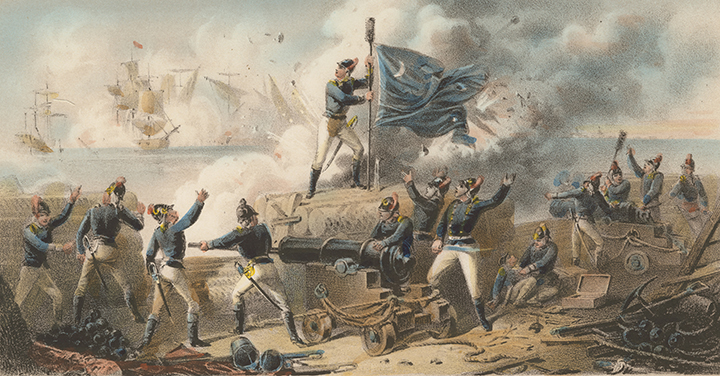 These troops were raised and (sometimes) equipped by the states. Their officers were appointed by governors. They were supposed to coordinate with the Continental Army but shorter enlistment periods, less training, and a separate chain of command sometimes made coordination difficult. 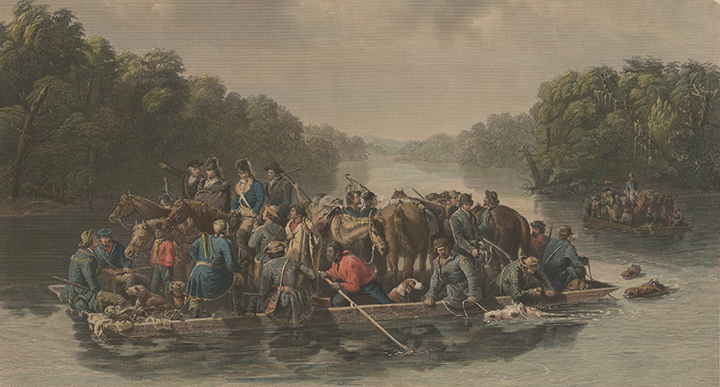 Partisans – Militia companies rose and fell with the seasons. Charismatic leaders raised these units which were rarely, if ever, paid. The militia was answerable only to their own officers and were willing to go home and tend the farm whenever necessary. They had short enlistment periods and could fade into the mist when most needed. Professional soldiers decried the use of militia because they were not hardened to the horrors of war and, when they showed up, often fled before the British bayonet charge. However, in South Carolina, it was the partisans or militia who kept the British Army occupied while the Continental Army regrouped. And, when well led, militia would stand with their professional counterparts. In SC, General Daniel Morgan at Cowpens and General Nathanael Greene at the Battle of Eutaw Springs both praised the conduct of their militia units. 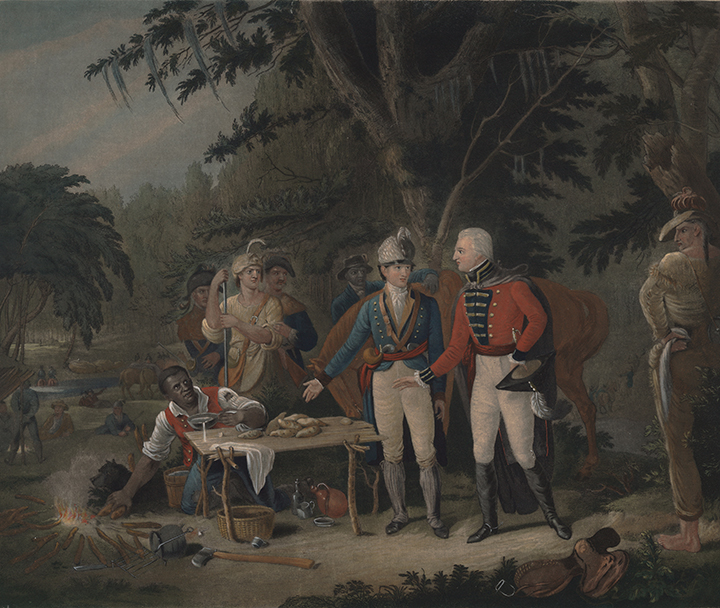 Great Britain’s professional army was considered one of the best in the world. The Regular units were well trained, well supplied, and well used to the horrors of war. These units were composed of British citizens and were led by British officers.

Gen. [Francis] Marion in his swamp encampment inviting a British officer to dinner. 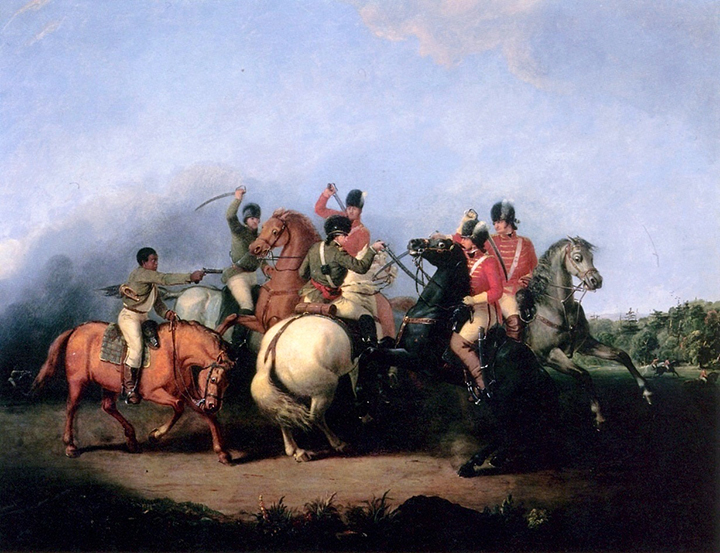 The British Army raised several loyal American regiments in the colonies.  They were led by both American and British officers. Although these regiments were not considered permanent units and could be disbanded at any time, several provincial regiments went on to become regular regiments in the British Army. In South Carolina, the Volunteers of Ireland and the King’s American Regiment were very active but the most famous, and hated, provincial regiment was the British Legion led by Lt. Col. Banastre Tarleton.

The Battle of Cowpens. 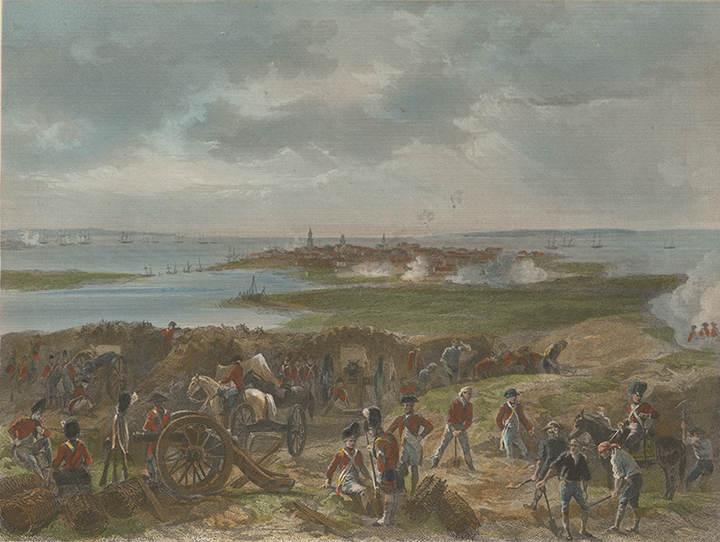 These Americans remained loyal to the King and fought to remain British. A counterpart to the Patriot militia, these King’s Friends often fought alongside the regular regiments.  They did not have the same training or experience as the Provincial or Regular Regiments and were considered much less capable than their rebel opponents. Nevertheless, they assisted the British as guides, laborers, and food suppliers. When the British retreated from their backcountry strongholds, many a Loyalist family followed them back to the coast. 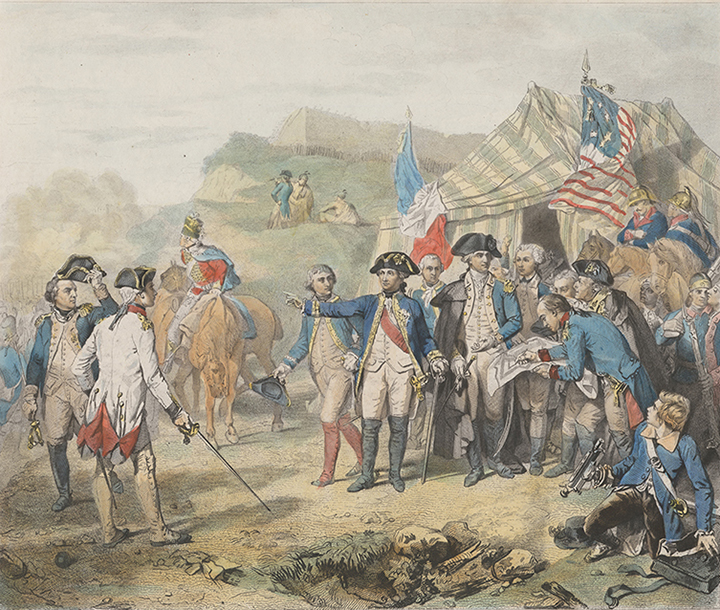 France bankrolled the Revolutionary War and their professional army and strong navy fought at the side of the American forces. France, a traditional rival of the British, had lost their holdings in North America after their defeat in the Seven Year’s War (the French and Indian War in America).  They saw the independence of the United States as a way to weaken their rival. Several French aristocrats also saw the American Revolution as a chance to fight for the ideals of liberty and republicanism against British tyranny. 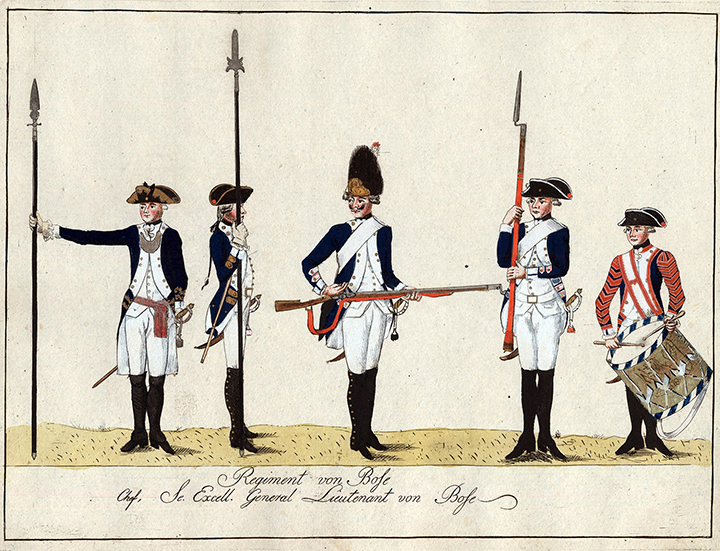 German governments were paid for the services of their armies to fight for the British Empire in the colonies.  They were comparable to the British Regulars in training, supplies, and experience. An estimated 30,000 Hessians fought in the colonies for the British. The Hessians were not true mercenaries; they fought under their own officers and at the order of their country’s leader.

Women were both ardent patriots and loyal King’s Friends. The majority kept the farms and businesses going while their husbands, fathers, sons, and brothers were away fighting. A number of women carried messages and some even spied for their cause. Others, known as camp followers, followed their men into the army. Camp followers were essential to the working of the armies as they washed clothes, cooked, nursed the wounded, and at times even fired the cannons! 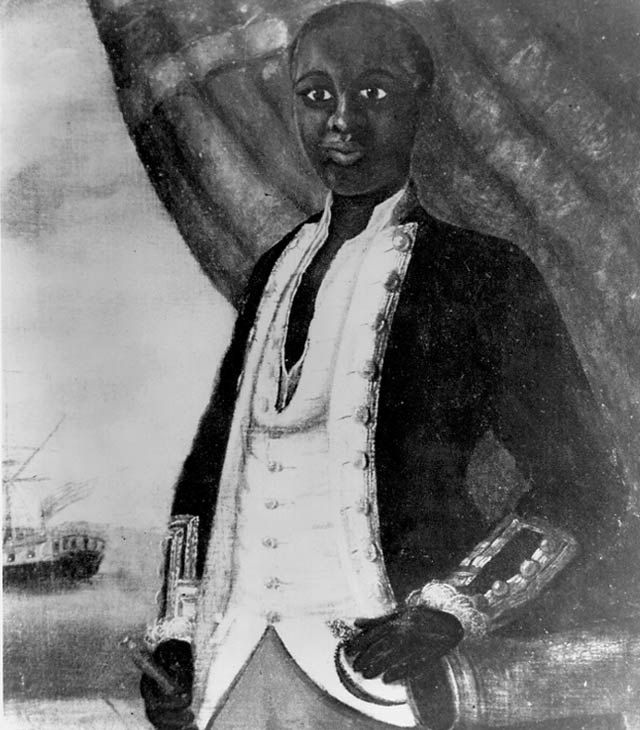 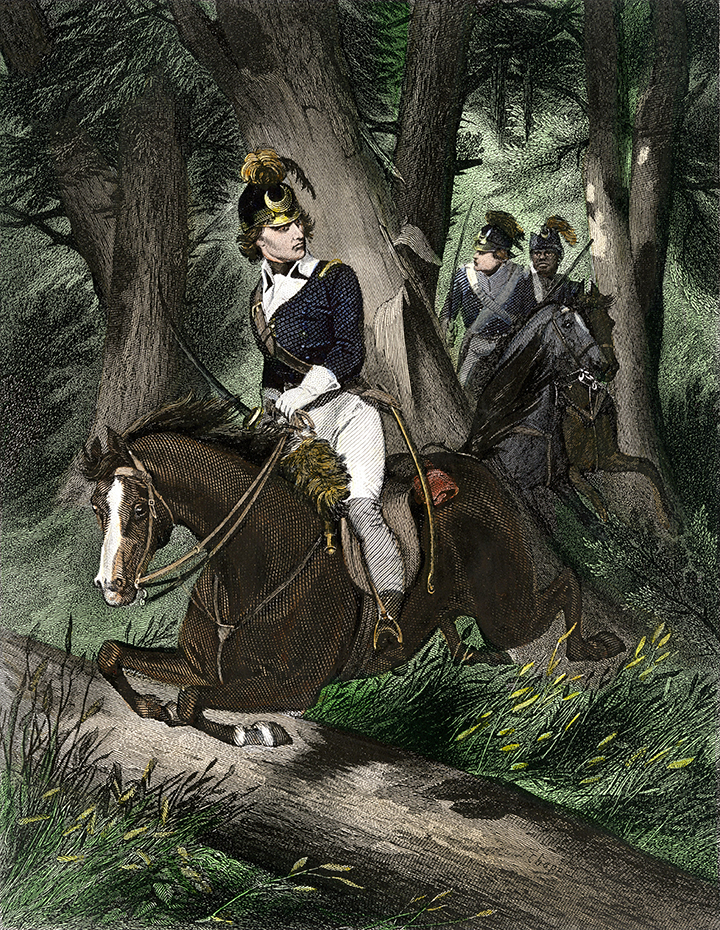 Horses were vital to both the Patriot and the Loyalist forces.  South Carolina was considered ideal for cavalry and battles could be won or lost by men on horseback charging the opposing infantry.  Horses were just as important for the militia – not because they fought on horseback but because the horse gave militia mobility.  Militia forces rode to a fight but usually fought dismounted.  If the battle looked like it was lost, militia could quickly mount up and retreat. Like the men who depended on them, horses suffered from malnutrition, fatigue, and battle wounds.

The Revolutionary War Visitor Center at Camden tells the story of the real turning point of the revolution – The Southern Campaign. Discover South Carolina’s hard-fought battles by determined patriots with their hearts set on liberty.

Did You Know? Prior to 1777, the far north west of our state was Cherokee territory. 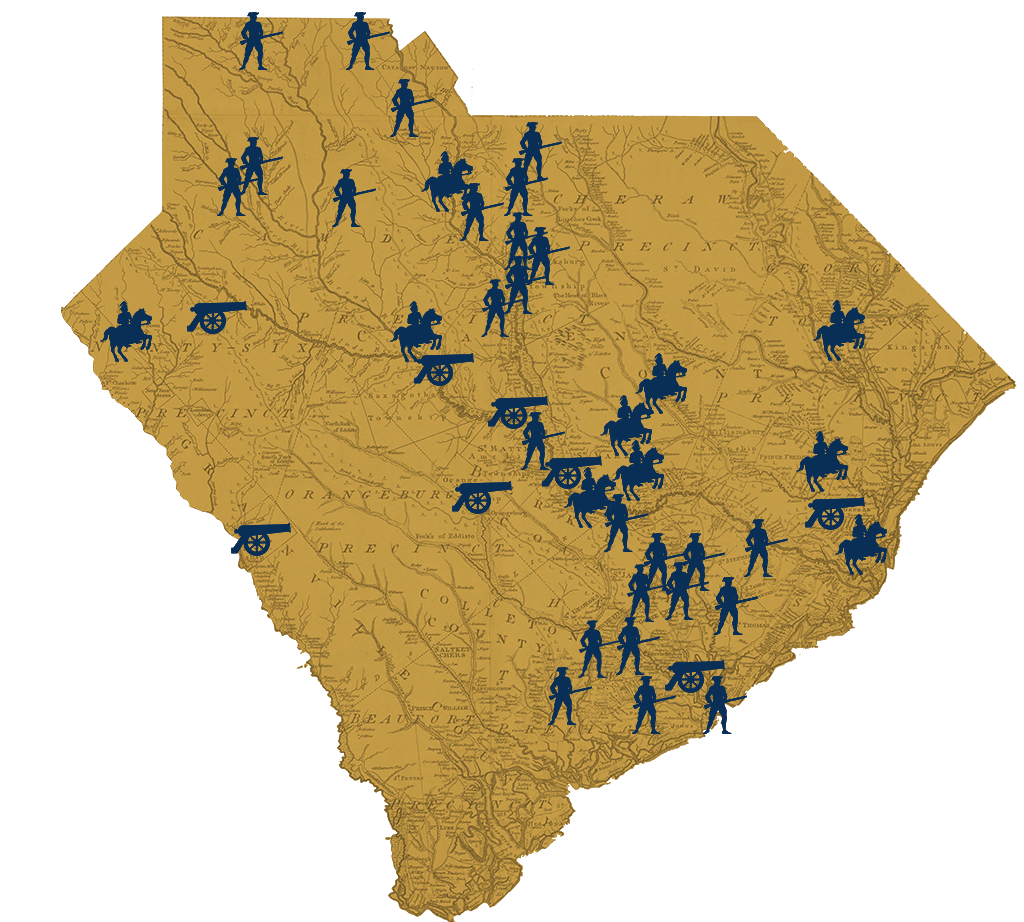 The American Battlefield Trust and the South Carolina Battleground Preservation Trust are currently developing the Liberty Trail – historic driving routes which will highlight Revolutionary War battles and skirmishes throughout the state.